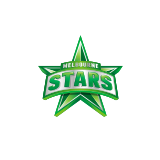 The Melbourne Stars is an Australian Twenty20 franchise cricket team, based in Melbourne, Victoria that competes in Australia’s Twenty20 competition, the Big Bash League.[1] The Stars wear a green uniform and play their home matches at the Melbourne Cricket Ground. One of their longest-serving players, Marcus Stoinis, recently achieved the highest individual score in Big Bash League history, scoring 147* against the Sydney Sixers at the MCG.

Starman & Starlet are two of the official mascots of the Melbourne Stars. In BBL|05 the Stars introduced a secondary mascot, Steven Seagull, the year after a seagull was struck with a cricket ball hit by Perth Scorchers batsman Adam Voges during a match between Melbourne Stars and Perth Scorchers in BBL|04 while the Stars were fielding at the Melbourne Cricket Ground. Rob Quiney, who was the first to the scene, immediately signalled that he feared the worst for the stricken bird as it lay motionless on the ground, before he delicately carried it over the boundary rope and placed it back on the turf. But just minutes later, the bird came back to life and started the walk along the boundary line, much to the delight of the huge MCG crowd.