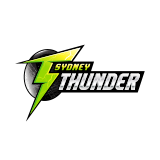 Along with the Sydney Sixers, the Sydney Thunder are the successors of the New South Wales Blues who played in the now-defunct KFC Twenty20 Big Bash. The NSW Cricket board unanimously decided on lime green as the team’s colour, though other colours were considered, and rejected as being too close to other Sydney sports teams.[2] Cricket Australia did not allow Cricket NSW to use the sky blue colour traditionally associated with New South Wales sports teams.

Englands Determination to Reclaim the Ashes

T20 World Cup Moved to the Middle East This...

Which is the Best Sports book for Cricket?