Steve Smith on his Redemption journey 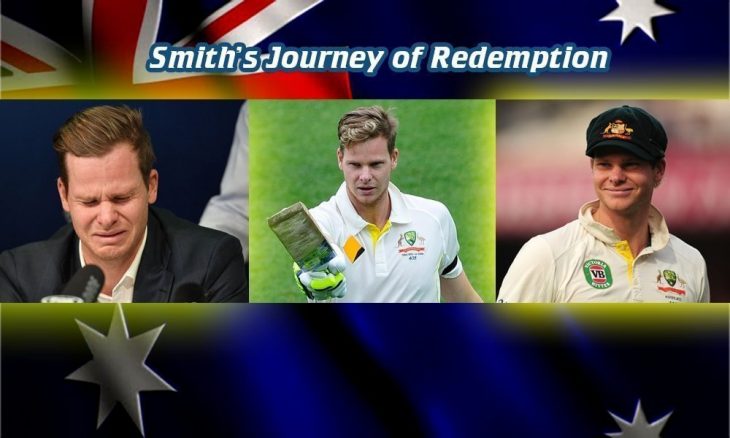 From overseeing a Ball Tempering and getting banned for it, till coming back and scoring a brilliant century in the first innings of the Ashes series, It has been a tough right for the Aussie star. But he has left his past behind and he is back with a bang.

Steve Smith was banned on 28th-March-2018 for his actions involving ball tempering during the third test against South Africa. He took the world by surprise and no one could believe that a player of such stature could be involved in something like this. Smith was probably at the peak of his career back then and was captaining a very successful Aussie side. One Year ban was imposed on his

30 years old Smith made his comeback earlier this year staring in IPL along with David Warner. He was then straight away picked into the Australian team. Steve Smith continued performing well and he had a huge role in the team’s semi-final qualification journey during ICC ODI Cricket World Cup 2019.

The “Not So Easy” Course of Redemption

It was never an easy task for Smith to get back in the ground and play in front of the fans, he was welcomed with the chants of “Cheat, Cheat, Cheat!” probably where ever he played since is come back crowd has rather being unforgiving. especially during the World Cup against Australia’s arch-rivals England. English crowd certainly didn’t like Smith’s come back and Smith was often greeted with some harsh banners, chants, mean tweets, and trolls on social media. All this did show some impact on his form and he was not getting any big scores at all. Smith scored with an average of 32 in the world cup games but then he stepped up his game at the right time when his team needed him the most.

Steve Smith got his form back in the Knockout games and scored an amazing 311 runs in 4 knockout games with 1 Century and 3 fifties. After being eliminated from the world cup in Semi-final against England. Now a new challenge was ready for smith in the longer format in the form of “The Ashes Series”.

England after winning the World Cup event came to the “Ashes” series with a lot of confidence. and Australia did need to raise their game seeking some redemption from the poor loss against England in the World Cup. But there is another redemption going on during this Ashes series and that’s Smith seeking redemption in the Test format.

Australia was under the pump in the first innings of the first ashes test when Smith came to their rescue. At one point it was looking that Australia isn’t going to cross 150 runs mark but thanks to one of the most exciting innings from Steve Smith of 144 runs Australia managed to get to a total of 284. This was not only a much-needed innings for the Australian team, but also It was needed for Smith’s confidence and his whole redemption journey as a well. Test cricket has been his strong suit and smith one again proved that he is worthy of his place in the side.

Much needed Claps and Standing ovation

Not only this innings proved his skills are still intact but also reinforced his determination to play for his country. This was a composed innings playing with only tail-enders like Peter Siddle. This innings will probably go done as one of his career-best. But perhaps what would matter for smith are those claps and the standing ovation he received for his effort at Edgbaston.

Smith has not the greatest of numbers in the shorter formats of ODI and T20I. Smith is an unorthodox player and isn’t the most pleasing to the eye with his shot selection but on the contrary, he has better numbers in Test Format averaging 62 in Test cricket.