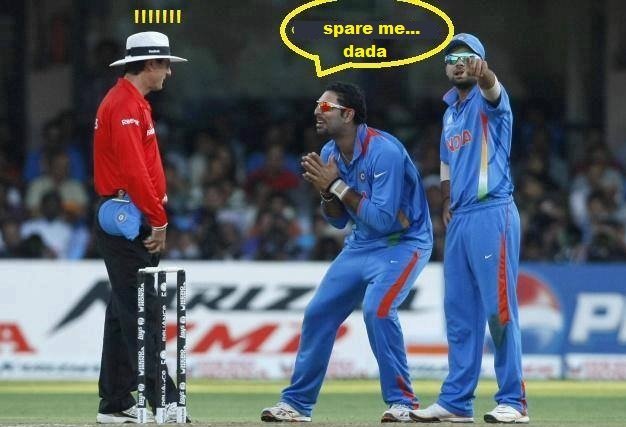 It is often said that cricket is a funny game. Not so much for the humor but because it can change so quickly, leaving the leading team looking silly before they realize what has happened to them.

But, because the game is played over a longer period of time, there is plenty of space within the action for players of opposing teams to banter with each other. Over the years this is one aspect of the game that has not changed.

The act of bowlers or fielders trying to put a batsman off his game by having words with him is called sledging. And, often, this is laced with biting humor. Here are 10 of the funniest sledges in cricket that will leave you in splits:

In a Test match in 1991 Pakistan’s Javed Miandad told the heavyset Australian fast bowler Merv Hughes: “You are a big, fat bus conductor.” When Miandad was dismissed by Hughes not too long after, the mustachioed big man cried out: “Tickets please!”

At a Test match at Lord’s the West Indian bowler Tino Best was itching to have a go against the left-arm spin of Ashley Giles. Andrew Flintoff, fielding at slip, sensed this, and said loudly to Best: “Mind the windows, Tino.” Best gave the bowler the charge, heave ho and missed and was stumped.

Viv Richards was perplexed when he played and missed two balls and, according to Crictribune, the Glamorgan bowler Greg Thomas told him: “It’s red, round and weighs about five ounces, in case you were wondering.” Richards smashed the next ball and told Thomas, you know what it looks like, go find it!

Eat for the country

Daryl Cullinan, the South African batsman, was known as Shane Warne’s bunny. When the two faced off, Warne told him: “I’ve been waiting two years to humiliate you again.” While he might have struggled with bat, Cullinan was quick to retort: “Looks like you spent it eating.”

The chickens come home to roost

Eddo Brandes, the Zimbabwean fast bowler, was a chicken farmer when he was not playing cricket. When he faced Australian fast bowler Glenn McGrath, he was asked: “Oi Brandes, why are you so fat?” The reply was a stunner. “Every time I sleep with your wife, she gives me a biscuit,” said Brandes, winning that battle.

Not the very best

When England’s Jimmy Ormond came up against arch-rivals Australia he was disparaged, with Mark Waugh suggesting he was not good enough to play for his country. Looking around and seeing Mark’s twin and more successful cricketer on the field, Ormond snapped: “At least I’m the best cricketer in my family.”

The wrong end of the stick

Dennis Lillee, the fiery fast bowler from West Australia, was known for his rage, with the ball in hand and otherwise. But, even he had a light touch from time to time. He was known to tell the batsman: “You’ve got some shit on the end of your bat.” As the unsuspecting batsman inspected the bottom, he would come back saying, no, not that end.

Legendary West Indian fast bowler Malcolm Marshall had Australian David Boon playing and missing without getting out. He had a quiet word: “Now David, are you going to get out or am I going to have to come round the wicket and kill you?”

Resist anything but temptation

When Australia were trying to get Sri Lanka’s generously built Arjuna Ranatunga out, they were frustrated. Ian Healy, the wicketkeeper, revealed the game plan: “Put a Mars bar on a good length and that should do it.”

When England fast bowler Fred Trueman drew the edge of the batsman only to see it being dropped by slip fielder Raman Subba Row, the apology came quickly. “Sorry mate, should have closed my legs,” as the ball slipped through. But Truman was not pacified: “So should your mother,” came the sharp reply.