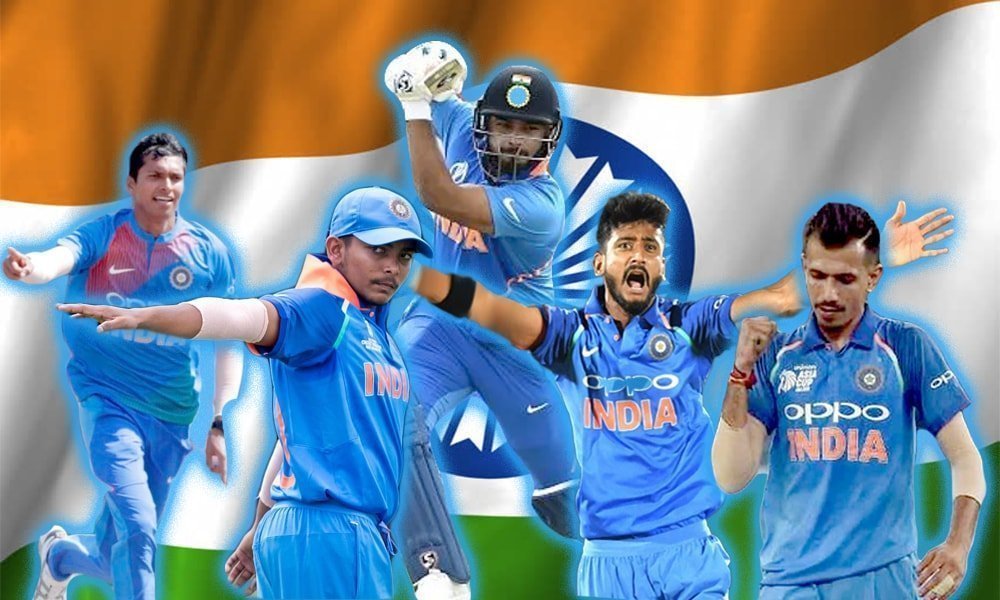 Cricket produced so many legendary players across the globe but if we particularly talk about Indian cricket, it produced a bunch of players in the past who are known for their talent and skill in the game. Kapil Dev, Anil Kumble, Sachin Tendulkar, Rahul Dravid are a few to name out but there have been several new faces who have got the chance to represent India at the top level. Let us take a look at some of the best young cricketers who are a key to a bright future of Indian cricket.

If we analyze the current squad of the Indian team, the Indian cricket team is probably the most consistent team in each department of the game. BCCI has a very effective way of regulating players so young players got the chance to play with the experienced players and that’s how they polish their skills and improve their game too.

BCCI has a very strong league system and a domestic circuit from which they select their young talent and then provide them chances to prove themselves as future stars for Indian cricket. IPL is the new platform these young cricketers utilize in order to showcase their talent at the grand stage as IPL is the undoubtedly most successful league, and the biggest plus is that young players get to play with the international elite cricketers and share the dressing room with them. This boost their confidence, professionalism and the skill set as well.

Here are some young Indian players who will be the future stars of Indian cricket.

Also Read: How to watch live cricket matches of India

Rishabh Rajendra Pant from Haridwar, Uttarakhand, India born on October 4, 1997. He is a left-handed wicketkeeper-batsman. he plays from Delhi, Delhi Capitals, Delhi Daredevils, Delhi Under-19, India A. he made his Twenty 20 debut in February 2017 vs England, while in test format he made his debut against England in august 2018. In One Day Internationals, he made his debut against West Indies in October 2018. Analysts across the globe and especially from India considered him as a smart choice after MS Dhoni retirement as a wicket-keeper batsman for the Indian cricket team.

Kuldeep Yadav from Kanpur, Uttar Pradesh, India born on December 14, 1994. He is an all-rounder who can bat and bowl as well. He is a slow left-arm Chinaman and also bats as well with the left hand. He plays from Central Zone, India A, India Under-19, Kolkata Knight Riders, Mumbai Indians, Uttar Pradesh, Uttar Pradesh Under-19. He made his test debut against Australia in March 2017, while he made his One Day International debut against West Indies in June 2017. In twenty20s, he made his debut against West Indies in July 2017. In recent times he performed well with the ball for the Indian team in the ODI World Cup and bilateral series too and when the team needs his performance with the bat, he performed well with the bat too. He will surely be the future of the Indian cricket team as an all-rounder.

Yuzvendra Singh Chahal from Jind, Haryana, India born on July 23, 1990. He is also a talented find for the Indian cricket team who can bowl and can bat as well. He plays as a bowler all-rounder. He is a leg break googly bowler and a right-hand batsman. He plays from Haryana, Mumbai Indians, and Royal Challengers Bangalore. He made his ODI and T20 debut against Zimbabwe in June 2016. He is a wicket-taking option for the Indian cricket team in recent times in the world cup and in bilateral series too. He bowled some splendid spells in IPL and play some handy innings with the bat too. He is capable of hitting big shots and also play according to the needs of the team. He will surely lead the spin department of the Indian cricket team in the future.

Khaleel Khursheed Ahmed from Tonk, Rajasthan, India born on December 5, 1997. in the recent past, apart from few, India hadn’t a pretty convincing history on fast bowlers but now in the present era Indian soil produce some great fast bowlers like Zaheer Khan, Jasprit Bumrah, Bhuvneshwar Kumar, and now Indian cricket team finds another impressing fast bowler like Khaleel Ahmed who can bowl fast. He plays for Delhi Daredevils, India A, India Under-19, Rajasthan Under-16, Rajasthan Under-19, Sunrisers Hyderabad. He made his ODI debut against Hong Kong on September 2018, while he made his T20 debut against West Indies in November 2018. In the last few bilateral series and against the West Indies in ongoing series, he performed very well and impress the selectors and the spectators by his skills. He will surely prove himself to be a great find for India in the future.

Krunal Himanshu Pandya from Ahmedabad, Gujarat, India born on March 24, 1991. He is the brother of Hardik Pandya who is also playing for the Indian cricket team. Krunal play as an all-rounder, who can bowl slow left-arm orthodox and can bat left-handed. He plays for Baroda, Baroda Cricket Association XI, Baroda Under-15, Baroda Under-17, Baroda Under-19, India A, Mumbai Indians. He made his T20 debut against West Indies in November 2018. In the recent past, he also had some eye-catching and eye-pleasing performances for his local teams and also for the Indian cricket team too. Analysts have a hawk-eye on him that how he will take his career in the future but many of them expected him as the future all-rounder for India.

Prithvi Pankaj Shaw from Thane, Maharashtra, India born on November 9, 1999. This 19 years old young batsman has a strong temperament and opens the innings for his local teams. He plays for Delhi Capitals, Delhi Daredevils, India A, India Under-19, Mumbai Under-14, Mumbai Under-16, Mumbai Under-19. He made his test debut against West Indies in October 2018. In the current era, with no doubt, India has the best opening pair in the form of Shikhar Dhawan and Rohit Sharma. But this little guy also has some great skills and proving himself as an opening option for the Indian team.

Navdeep Amarjeet Saini from Karnal, Haryana, India born on November 23, 1992. He made his T20 debut against West Indies in the ongoing series 2019. He is a right-arm fast bowler and Virat Kohli uses him as an attacker bowler and he proves himself as a fast bowler of strong temperament. He along with Khaleel Ahmed destroy West Indies batting lineup and made his space in the team. He plays for Delhi, Delhi Daredevils, Royal Challengers Bangalore. He is a great find for India and will also be a future of Indian pace attack.