IS JOFRA ARCHER THE ANSWER TO ENGLAND’S ASHES PROBLEM? 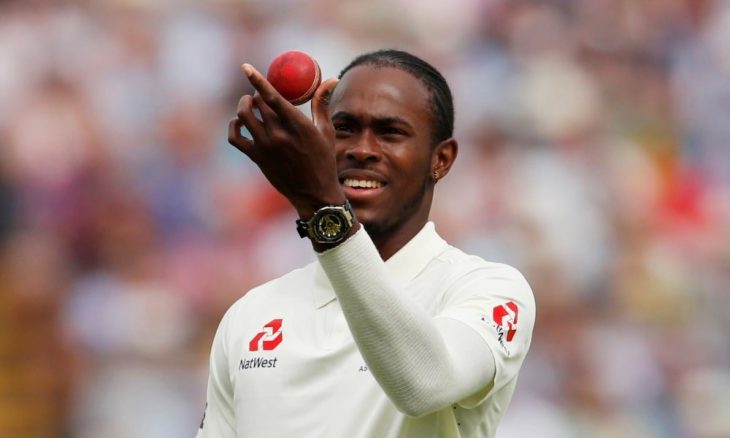 The first test of the ashes series 2019 was not up to the expectations of the England team and the captain. In the first test, James Anderson was out of color, he was not 100% fit which hurt the England team so badly on the field. The way Steve smith bat in the 2nd innings, it seems like England bowlers did not produce any sort of trouble for the Aussies. Australia wins it quite comfortably in the end.

England think tank is now thinking of a surprise element for the 2nd test of the Ashes series. Another problem for the England team is the calf injury of their front line bowler James Anderson, who is now out of the 2nd test match.

Think tank, management and the captain are now thinking for the substitute of their loss and they think Jofra Archer is the perfect replacement for the loss they had in the form of James Anderson. Archer is not as much experienced as James Anderson is, but they think their world cup hero shall maybe prove himself as a surprise element in the red-ball cricket. Archer’s biggest battle will be against the man of the match of First Test Steve Smith, who is in sublime form and scoring with command and consistency.

Also Read Steve Smith the only wall in front of England to climb.

Jofra Chioke Archer, from Bridgetown, Barbados born on April 1, 1995. He made his One Day International debut against Ireland in May 2019, while he made his T20 debut against Pakistan in the same month of the same year in May 2019. After surprising performances with the ball, he called up for the world cup squad, which is very rarely seen, and he proved himself in the mega event too.

Within the month after his debut, he called up for the mega event squad. England media and cricket analysts set an eye on Archer to monitor him either he is the right choice or not. Archer proved himself at the mega stage and performed very well for his team. He is among the few leading wicket-takers of the tournament. He proved that he can absorb pressure and to deliver for his team at the pressure moment when the captain gave him the ball to bowl the final super over. He bowled super over brilliantly which results in winning the world cup 2019. Jofra Archer took 20 wickets at all very important world cup stage.

ARCHER AS A SURPRISING ELEMENT:

If archer plays the 2nd test match as we heard from the news, then this will be the test debut for the Jofra Archer. England’s think tank thinks that Jofra Archer as a surprising element in the 2nd test of the ashes series helps them a lot to capture the Aussies batting line. With his short startup and quick line to line bowling, he will create problems for the Australian team in the absence of Anderson.

Jos Buttler thinks and hopes that speedster Jofra Archer will be the X-Factor for England in the Test series. The test format is a different format form the ODI and T20 so they think that Archer’s test debut in the ashes series plays a vital role for their team and the nation and helps them to regain the ashes.

Pat Cummins, Aussie pace star and also the star performer in the 2nd innings of the 1st test match help Australia to make over the line. He responded to the news revolving about Archer. He said that Australia can handle the Jofra Archer’s Ashes threat. Everyone from both camps of England and Australia is now considering Archer as a turning point but at the same time Aussies are quite comfortable and they think they handled it easily.